Tonight is the NBA Las Vegas Summer League Championship on ESPN2, and we are in for a treat. I know what most people are thinking… does summer league even matter?

Well my answer to that is… kind of. As we saw this summer, the No. 1 pick Ben Simmons sat a number of games for rest, which took away from the excitement and importance of the process. However, the NBA, although a team sport, is the most individualistic team sport of the Big 4, meaning that one player can win you a game. With that being said, we get to watch two 2016 All-Americans and the 2015 Final Four Most Outstanding Player tonight. 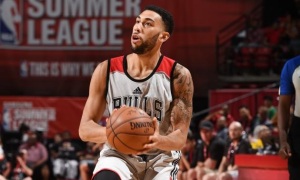 More than just the fact that it is a title game of sorts, the two teams playing provide us with some interesting headlines. One, the Bulls were in negotiations to possibly trade Jimmy Butler to the Wolves, which would have landed them the No. 5 pick, Kris Dunn. Two, former Bulls head coach Tom Thibodeau is now Minnesota’s new head coach. And three, we get to see the 2016 LV Summer League MVP Tyus Jones continue to make life difficult for the Minnesota coaching staff.

The Timberwolves have four solid point guards heading into the 2016-17 season (Jones, Dunn, Ricky Rubio, Zach LaVine). The age old saying about NFL quarterbacks is if you have two good QB’s, you have no good QB’s. To a lesser extent, that can be true for NBA point guards, as they are the leaders on the court. Now, the league has experienced a bit of a shift when it comes to guards, especially point guards. Small guards have been playing together the last few seasons. For example, Damien Lilliard and CJ McCollum in Portland or any combination of Brandon Knight, Eric Bledsoe, Devin Booker and now Tyler Ulis in Phoenix. So, maybe they go small in the backcourt, considering the front line of Wiggins, Towns and Pekovic is solid.

As for the Bulls, many critics were bashing them for the moves they made this summer. It has been well documented that Rondo, Wade and Butler are not three point threats, leaving Chicago with a hole in that department. However, the young Bulls are now 6-0 in summer league. Second year man Bobby Portis was voted onto the summer league first team, and rookie Denzel Valentine has impressed thus far. Felicio has been a beast in the paint as well. On top of the recent success, the Bulls have young stars like Jerian Grant, Doug McDermott and Nikola Mirotic to add to the veteran backcourt.

The Wolves are on the come-up, and the Bulls were said to be entering a rebuilding mode… but I think that both of these teams may be misrepresented by these assumptions. Minnesota has solid young talent, but let’s not forget that they play in the West, which still has 3 or 4 powerhouses. On the other hand, the Bulls play in the East, where aside from the Cavs, there are no real top tier teams.

Ultimately, the winner of this game may be irrelevant, especially without a headline like last year (Becky Hammon won the title as Spurs HC). However, these will be two of the more unpredictable and interesting teams this season… making this a game to watch.

And let’s face it… it’s July. You can only watch so much baseball.