The most important position in all of team sports in the quarterback. They touch the ball every single play and dictate what the team is going to do at every point throughout the game. If your team is going have success in today’s NFL, you must have an above average quarterback leading the way. Here are the top 10 quarterbacks heading into the 2017 NFL season.

Manning threw for 4,000 yards for the third consecutive season and led the Giants to an 11-5 record in 2016. With Odell Beckham Jr. and Brandon Marshall leading the New York receiving core, I think it’s safe to say 2017 will be another impressive season for Eli… if he can avoid turning the ball over.

Rivers finished 2016 with his fourth consecutive 4,000-yard season and eighth of his career, but the Chargers have only won nine games in the last two seasons. Injuries to key rookies Mike Williams and Forrest Lamp have already put a damper on their inaugural season in Los Angeles, but if Melvin Gordon and Kenaan Allen can stay healthy, Rivers and the Bolts could make a splash in the AFC West this season.

Six consecutive 4,000-yard seasons and three trips to the playoffs in that span give Matthew Stafford just enough to sneak into the top-10 heading into 2017. He didn’t have the same overall numbers in 2016 as the top-tier guys on this list, but many still considered him an MVP candidate due to his NFL-record eight fourth quarter comebacks. In a division that’s been dominated by Green Bay for years and without a sustainable running game, it will be an uphill battle for Stafford as he tries to notch his first career postseason victory.

Luck finished with an impressive 31 touchdown passes to 13 interceptions in 2016, but Indianapolis failed to dethrone the Houston Texans for the second straight season. Luck is 43-27 as a starter and hopes to reclaim the top spot in the improving AFC South in 2017. What was at most a two-team race for decades has become an open battle, as the Titans and Jaguars have significantly improved their rosters over the last few drafts.

Battling injuries and a depleted offensive line for most of the season, Russell Wilson was still able to lead the Seahawks to a fifth straight season of 10 or more wins. Due to an inability to run in 2016, Wilson finished with a career-high 4,219 passing yards. Seattle still has one of the best defenses in the league, and their quarterback is ready to utilize his many weapons including Doug Baldwin, Jimmy Graham, and newly-acquired running back Eddie Lacy. 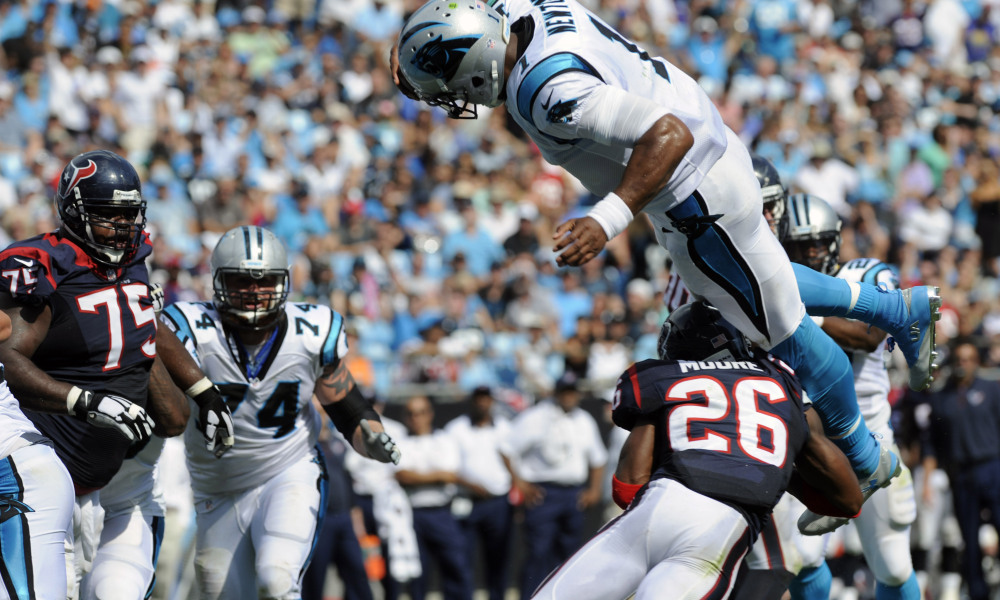 Cam Newton had a pretty awful year in 2016, after a phenomenal MVP season and trip to the Super Bowl in 2015. Nevertheless, the guy is still a freak athlete with all the tools to be the best quarterback in the league at any moment. The only problem is he keeps getting banged up and lacks the consistency of the top guys on this list. A healthy Kelvin Benjamin, catch-machine Greg Olsen, and first round draft pick Christian McCaffrey have Newton and the Panthers poised for a huge rebound year in Carolina.

Derek Carr’s MVP campaign came to a halt in 2016 when he suffered a broken fibula in a week 16 victory against the Colts. The Raiders have been an irrelevant franchise for years, but the recent selections of Carr, Khalil Mack, and Amari Cooper have boosted them to championship contention. Of course, there are a lot of off-the-field distractions that could hinder the progression of this young team with the announcement that the team would be moving to Las Vegas, but the signing of Marshawn Lynch has sparked excitement for the potential of a Super Bowl trip while the team still calls Oakland home.

With all the talk about Big Ben possibly retiring after the 2017 season, the Steelers are quietly putting together their best roster in recent memory. Of course, the Killer B’s grab most of the attention, but the young defense led by Ryan Shazier and Bud Dupree gives Pittsburgh a lot to be excited about. The truth is as long as Roethlisberger is suiting up for the Steel Curtain, they will be a threat in the AFC. I expect a monster season out of the two-time Super Bowl Champion.

Last season was full of the ultimate rise and fall for Atlanta star quarterback Matt Ryan. The 2016 season began with Ryan leading the Falcons to the number one overall offense in the NFL, and it ended with him being named Most Valuable Player following his 38 touchdowns and seven interceptions. The magic continued as the Falcons stormed their way through the NFC and took a commanding 28-3 lead over the Patriots in Super Bowl 51. Well, you all know how that game ended, and now, Matt Ryan and the Falcons are trying to pick up the pieces before they have to face one of the most competitive divisions in football. A return to the Super Bowl is a long way away when you are playing in the ultimate worst-to-first division, and every team has the ability to make a run.

There is not enough to be said about what Drew Brees has been able to accomplish in the NFL. Last season was his third consecutive season leading the NFL is passing yards and the seventh time in his career, and he did it while completing 70 percent of his passes. The only problem is the Saints have finished with a losing season three years in a row and four of the last five. I don’t blame that on Brees though, because it’s hard to score 40 points per game, and that’s pretty much what he has to do with that defense in New Orleans. Sure, he gets paid A LOT, but he is also going to do down as one of the greatest passers of all time. He will be a first ballot Hall of Famer, and as he nears 40, he still remains among the best in the game. With the addition of Adrian Peterson in the backfield, the offense should be more balanced and the team could make a splash in the extremely tough AFC South that accounts for three players on this list. 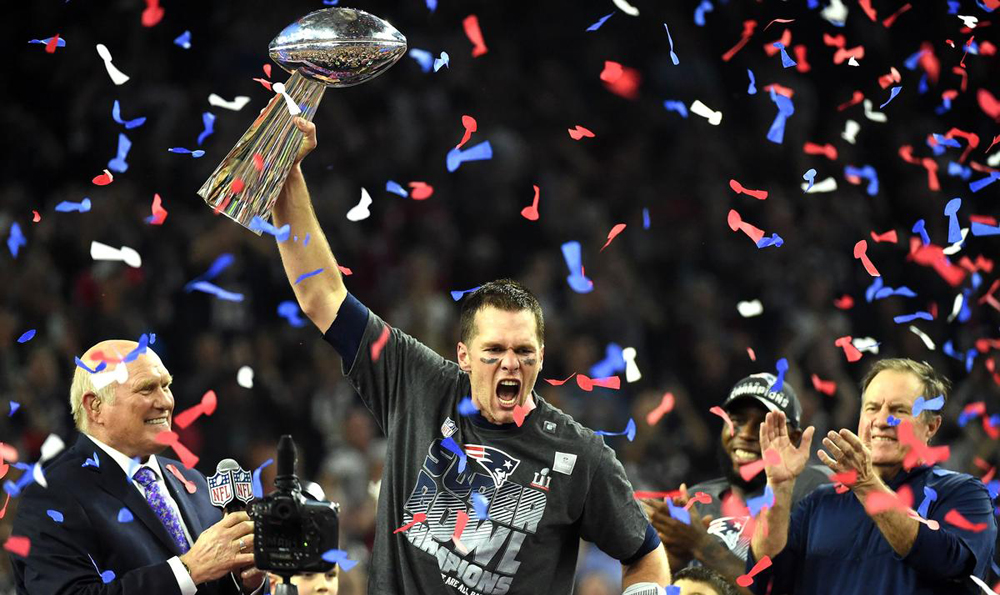 At this point, it’s hard to dispute Tom Brady as the GOAT, and his comeback win in Super Bowl 51 will go down as the greatest comeback in sports history, but he is not the best quarterback in the game today. He finished 2016 with 28 touchdowns and just two interceptions despite missing the first four games due to suspension. He led the Patriots to a Super Bowl without their best pass-catcher (Gronkowski), and he seems to find success with anyone who steps on the field (i.e. James White, Chris Hogan, Malcolm Mitchell). Now he has Brandin Cooks and a healthy Gronkowski to add to his weaponry, so I expect to see New England back in the AFC Championship game next year.

Aaron Rodgers could be the best quarterback in the NFL and the most underrated quarterback in the NFL at the same time. What this guy is doing on an annual basis is absolutely unreal. If the Falcons didn’t burn out the light bulbs on all the scoreboards in the NFL last season, Rodgers would have won his third MVP award. Forget the fact that he threw 40 touchdowns to just seven interceptions, but he led the Packers to six straight wins to sneak into the playoffs, then proceeded to beat the hottest team in the NFL in the New York Giants and the top team in the NFL in the Dallas Cowboys to set up an NFC Championship matchup with the Atlanta Falcons.

Right now, Rodgers ranks 11th all-time is passing touchdowns with 297. At the same time, he has only thrown 72 interceptions in his career. To put that into perspective, every quarterback that has thrown 300 touchdowns has reached that mark with at least 100 interceptions to their resume. I think it’s safe to say that Rodgers will not throw 28 interceptions before he tosses three touchdowns in 2017. If he has a monster season, he could pass up five more people (Elway, Roethlisberger, Rivers, E. Manning, Tarkenton) on the career touchdowns list, all of which have more than double the amount of interceptions. Oh, and let’s not forget that he didn’t play in his first three seasons, sitting behind Brett Favre.

Rodgers has a 99-52 overall record with the Packers, making the playoffs in all but his first season as starter in Green Bay. Yet another year without a solid running game awaits him in 2017, but I suspect the Packers will be in the conversation about Super Bowl contenders again this winter.